The meeting exchanged views on business development orientation in 2019, strategy to boost the quantity of Calcium Carbonate Powder and PVC Compound in Bangladesh. To do this requires need the close coordination of both sides, policies on sales should be built towards facilitating support for the company in this market. Nhat Huy Group highly appreciates Bangladesh market, which is considered a potential market, Mr S.A. Kaysar expressed his view to support Nhat Huy Group's investment in Bangladesh market.

A few images of the delegation with the staff of Nhat Huy Group: 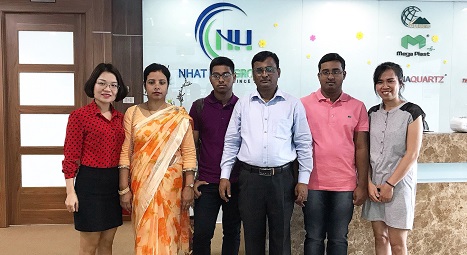 In the evening the same day, the delegation was warmly welcomed, and enjoyed Vietnamese specialty dishes with the Chairman of Nhat Huy Group - Mr. Nguyen Chan Chinh and Nhat Huy Group's staff.

Mr. Chinh had an intimate meal with the delegation

The dinner took place in an intimate atmosphere, with stories about the life and interesting experiences of the delegation when come to Vietnam.

Mr. Chinh had an intimate meal with the delegation

On February 22 nd, 2019, the delegation had a very interesting visit in Ha Long Bay. Ha Long Bay, known in Vietnam as Vịnh Hạ Long (Bay of the Descending Dragon), Ha Long Bay was awarded the title of UNESCO World Heritage Site in 1994, which has helped to protect the area. The limestone in this bay has gone through 500 million years of formation in different conditions and environments. The geo-diversity of the environment in the area has created biodiversity, including a tropical evergreen biosystem, oceanic and sea shore biosystem.

The delegation visited to the magnificent caves, as well as visits to the floating villages scattered around the bay. For most of us, a cruise on the emerald clear green water of Halong Bay is a unique experience, so it might be hard to imagining living everyday life surrounded by the beauty of this well-known bay.

Among the biggest and the most beautiful caves of Halong Bay, Amazing Cave welcomes a lot of visitors every year. Ascending to the grotto, the way is covered by trees and foliage, offering lush landscape into the mountain. The formations in the cave inspire a lot of interesting imagination of human and animals in varying poses. The sightseeing tour into the cave is just like a tour to witness the heaven with huge spaces revealed after narrow lines. Visitors come from surprise to surprise, that’s why it is named as Surprising or Amazing Cave.

Memorable moments of the delegation at Ha Long Bay

Ha Long Bay Trip is a perfect way to the delegation had experience pristine beauty and sustainable ancient culture of Viet Nam. There were many emotions, hope that cooperation between the two companies to become stronger in 2019, further development of Nhat Huy Group in Bangladesh market.